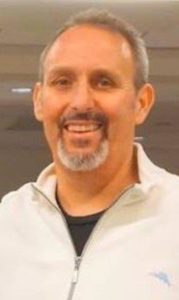 John Ross Talbot, Jr. was born on June 28, 1967 in Fresno, California and raised by John Ross
Talbot, Sr. and Peggy Talbot. “Big John” as he was affectionately known by his friends and
family, passed peacefully from this world on April 23, 2019 with his loving wife Michelle,
mother Peggy and devoted son Jordan in his thoughts.
John attended Soquel and Fresno High School and played baseball and basketball. John loved
being close to the beach and spent most of his adult life living in Maui, Santa Cruz and
Manhattan Beach, California. Every morning he grabbed a cup of coffee and headed to the
beach to meditate and start his day.
John was known as an expert mechanic, and eventually would manage several automotive
repair shops. From 2005-2014 he was the General Manager at Bobby’s Pit Stop in Santa Cruz,
California. He had a reputation for honesty and straight talk. Among his friends, it would have
been unthinkable to purchase a car without getting input from Big John first. He also granted
innumerable favors to those in need of repair.
Big John was fanatic about sports. He was a devoted San Francisco Giants baseball fan and a
dedicated follower of Warriors Basketball. As a signpost of his generosity, John tirelessly gave
to coaching Capitola-Soquel Little League, youth baseball travel teams and Aptos High School
baseball. It is not an exaggeration to say that many successful baseball players from Santa Cruz
had at one time been coached by Big John. He had a way of inspiring young men to achieve
their very best on the baseball fields, and in their personal lives. For it was with this passion for
life with which he moved through the world, and his drive and smile were contagious. With
sleeves rolled up, Big John dove into the world, shepherding his beloved son through his own
lengthy baseball career, including a full scholarship to play baseball at the University of
California, Berkeley.

Jordan was the light of John’s life. Recipient of the his father’s radiant smile and height, Jordan
and Big John shared a father/son bond that few will realize in their lifetime. John was a devoted
single parent who was committed to setting a good example to ensure Jordan grew into a fine
young man with a good heart and spiritually sound values. He was a proud father who regaled
his friends and family with the latest stories of Jordan’s achievements.
John found his true love with Michelle and it was love at first sight on Halloween 2013. He
realized he didn’t want to be apart and relocated to Southern California to be with her. They
got married on April 20, 2014. John and Michelle enjoyed spending time with family and
friends as well as time with each other traveling, walking on the beach and going to the movies.
They never left each other’s side and always wanted to spend every moment together.
As John was devoted to his mother, wife and son, they had to share his dedication with the
fellowship of Narcotics Anonymous. This was not an easy undertaking, as John was profoundly
loyal to both his and the recovery of others, and earned his eternity coin with 31 years clean.
He was known for sharing the truth, and perhaps peeling one layer below that to his very soul.
As he was not afraid of a physical challenge, he was also unafraid of going through perilous
emotional waters if it would help someone else survive their own despair. He leaves many
grieving men and women who had been mentored by him, both in recovery and in the
community at large.
With his passing, we are left with shoes much too big to fill, both literally and figuratively. John
was the proverbial gentle giant. A man who could loudly affirm his strong beliefs of conscience,
yet, he had a soft and caring side that few can parallel. We are left grateful for the love he was
given by his wife, son and mother. Most of all, we are grateful to have had him here for us, if
only for a time.
John is survived by his wife Michelle, son Jordan, mother Peggy, Grandpa Dean, sister Denise
and brother-in-law Filbert, and nieces and nephews, Sara (Kasey) and Anthony, and great niece,
Leeana and great nephews, Kayden and Kolby.
A celebration of life gathering will be held in Los Angeles on Saturday, May 18 at Westside
Vineyard Church from 11:00am-3:00pm and Santa Cruz on Saturday, May 25 at Shorelife
Community Church from 12:00pm-4:00pm. All are welcome to attend and celebrate John’s life.
In lieu of flowers, please consider making a tax deductible donation to “The John Talbot
Memorial Fund” at Capitola-Soquel Little League, P.O. Box 1344, Capitola, California 95010 or
www.csllbaseball.com and look for John’s photo on the link.